As per a statement issued by the portal, the following features has been enabled.

Now, E-waybill system is being enabled to auto calculate the route distance for movement of goods, based on the Postal PIN codes of source and destination locations. That is, the e-waybill system will calculate and display the actual distance between the supplier and recipient addresses. User is allowed to enter the actual distance as per his movement of goods. However, it will be limited to 10% more than the displayed distance for entry. That is, if the system has displayed the distance between Place A and B, based on the PIN codes, as 655 KMs, then the user can enter the actual distance up to 720KMs (655KMs + 65KMs).

In case, the source PIN and destination PIN are same, the user can enter up to a maximum of 100KMs only. If the PIN entered is incorrect, the system would alert the user as INVALID PIN CODE. However, he can continue entering the distance. Further, these e-waybills having INVALID PIN codes are flagged for review by the department. Route distance calculation between source and destination uses the data from various electronic sources. This data employs various attributes, for example: road class, direction of travel, average speed, traffic data etc. These attributes are picked up from traffic that is on National highways, state highways, expressways, district highways as well as main roads inside the cities. A proprietary logic is then used for approximating the distance between two postal pin codes. The distance thus derived is then provided as the motorable distance at that point of time.

Based on the representation received by the transporters, the government has decided not to allow generation of multiple e-way bills based on one invoice, by any party – consignor, consignee and transporter. That is, once E-way Bill is generated with an invoice number, then none of the parties – consignor, consignee or transporter – can generate the E-Way Bill with the same invoice number. One Invoice, One E-way Bill policy is followed. The change will come in the next version.

The transporters had represented to incorporate the provision to extend the E-way Bill when the goods are in transit. The transit means the goods could be on Road or in Warehouse. This facility is being incorporated in the next version for the extension of E-way Bill. During the extension of the e-way bill, the user is prompted to answer whether the Consignment is in Transit or in Movement. On selection of In Transit, the address details of the transit place need to be provided. On selection of In Movement, the system will prompt the user to enter the Place and Vehicle details from where the extension is required. In both these scenarios, the destination PIN will be considered from the PART-A of the E-way Bill for calculation of distance for movement and validity date. Route distance will be calculated as explained above. 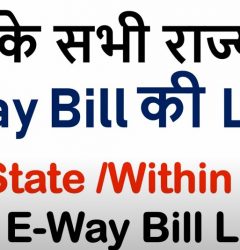 State-wise limits of E-way bill generation as on 3 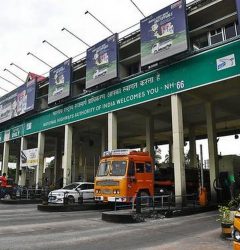 No more fixed tolls, every kilometer to be tracked 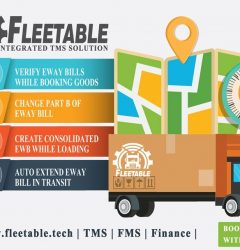 GST: A breakdown in E-Way Bill and E-Invoice syste